For nearly 100 years, the star system has been a straightforward way to gauge how good a restaurant is: more is better. No confusion there. No nuance, either. In mid-September, however, @rocketjump proffered an unusual spin on stars; he posted a video on TikTok explaining why he only goes to Chinese restaurants that get 3.5 stars out of 5 on Yelp. An analysis follows the 50-second video below.

Why I only go to Chinese restaurants with 3.5 star ratings

The thrust of his argument: Any Chinese restaurant in a major metropolitan area that gets 4 or 5 stars has appeased non-Chinese cultures by rewarding eateries for great service — something he is convinced correlates to mediocre food. In his opinion, you want to go to the 3.5-star ranked spots where the food is most authentic — and delicious — because the establishment focuses on flavor, not service. At 5-star joints, the service is “too good.” The food is “not as good as it could be.” And “too many white people like it.”

It’s all about cultural expectations of service. Generalizing madly but convincingly, he says that you want to go to places where the waiters are rude, and they’re not going to pay attention to you, but the food will taste better.

His theory leans heavily on the idea that in Asia, food servers are not as proactive and they’re not going to just come to your table to give your refills. You’ll need to flag them down. At the same time, people on Yelp are “insufferable.” They’re knocking restaurants because the service is bad. In the end, the food balances it out. “So you end up at 3 and a half stars,” he explains.

Is he right? Is there any way to measure it? One woman from Queens, New York — @crabby_jackieee — applied his theory to her favorite Chinese restaurants and, lo and behold, she reports the hack is spot on (the video starts with @rocketjump and she jumps in after five seconds).

To test the system myself, I googled “best Chinese restaurants near me,” and pored over the results. Interestingly, of the top 10, only one had 3.5 stars — Bonnie’s, which also happened to have appeared in Bon Appetit’s “50 Best New Restaurants” article recently. Coincidence? I think not. 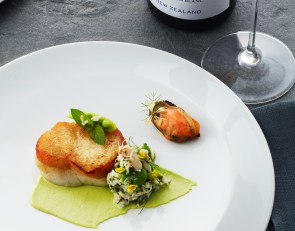