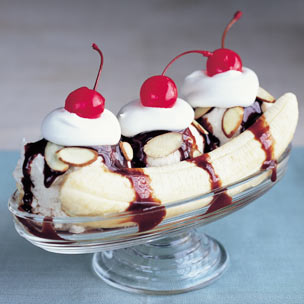 Banana Splits with Hot Fudge Sauce Recipe. The classic ice cream parlor favorite is simple to make at home. Is there a better way to enjoy bananas?

The vanilla bean was first cultivated and processed by the Aztecs, who used it to flavor a drink that would later be known as chocolate. Of the world’s vanilla beans, 75 percent come from Madagascar, with Tahitian and Mexican beans making up the rest. When time allows, it is always best to use vanilla beans, scraping all the flavorful seeds from the interior, but high-quality extract also delivers the distinctive sweet and complex flavor of the bean.

Serving Tip: If you do not have oblong sides, cut each banana half in half crosswise. Put the ice cream in chilled round bowls and surround each portion with 4 banana quarters.

Note; The hot fudge sauce may be prepared in advance. Let it cool to room temperature, then cover and refrigerate for up to 1 week. Reheat the sauce gently in a double boiler over barely simmering water before serving.