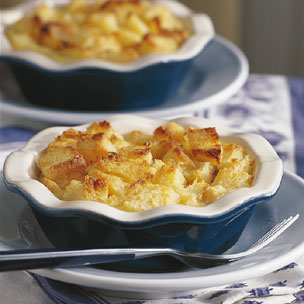 Brioche Bread Pudding Recipe. Each of these rich desserts is big enough to share. If you’d like, you can substitute hearty country bread for the brioche. For a sweet touch, add 2 tablespoons golden raisins to the egg mixture just before pouring it into the pie dishes.