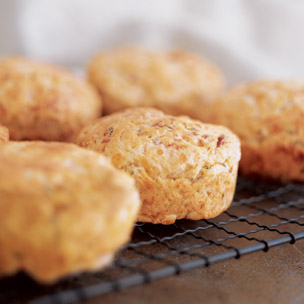 What are the secrets to making tender flaky Cheddar Bacon Biscuits? When cutting the butter into the flour, work quickly so it doesn’t melt too much before you put the biscuits in the oven. And when adding the milk, don’t overmix the dough; stir until the ingredients are just combined.