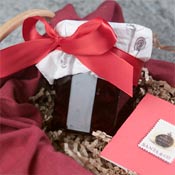 Even people who are very pressed for time like to give home-made gifts – this jam is perfect for them.