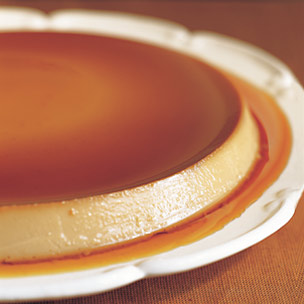 Coffee and Kahlua Flan Recipe. Always use caution when caramelizing sugar as the syrup is dangerously hot. Use a heavy, light-colored saucepan, preferably copper, so you can judge the color of the syrup. The addition of a little corn syrup helps prevent the sugar from recrystallizing on the sides of the pan. Once all the ingredients are in the pan, the sugar has dissolved and the liquid has begun to turn amber, do not stir it. Also, never leave the stove once the syrup starts to color. The caramelizing process is quick, and the syrup can burn easily.

If possible, use true cinnamon, the delicately flavored cinnamon bark native to Sri Lanka. The stronger-tasting cassia bark from Indonesia, China and Myanmar should be used in smaller amounts, as called for in this recipe.