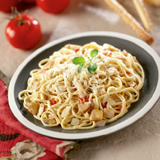 Tetrazzini has never been so easy! This version is made with HORMEL® Refrigerated Entrees Sliced Turkey Breast with Gravy along with pimentos and cheddar cheese.