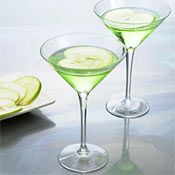 The current apple of the trendy martini drinker’s eye seems to be the “Sour Apple”, it was invented at Lola’s in West Hollywood. The drink’s name also honors the bartender named Adam who came up with the recipe.