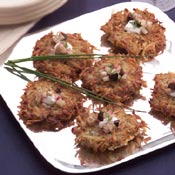 Cooking.com Tip: Believe it or not, peeling potatoes with a hand-crank potato peeler makes this kitchen chore fun. Not only does this device peel potatoes effortlessly, but it cores and slices apples, too. You may find people volunteering for kitchen duty.