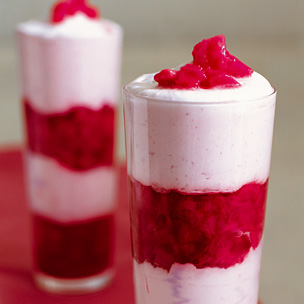 Rhubarb grows in thick, celerylike stalks and has a tart, fruity flavor. Field rhubarb is available in summer and is a bright cherry red. Its flavor is more pronounced than that of hothouse rhubarb, which is a brilliant pink and is usually available year-round. Select crisp, unblemished, brightly colored stalks. To avoid a stringy filling, always slice the rhubarb no thicker than 1/2 inch. For this recipe, it is chopped even finer.

Note: A fool is a traditional English dessert, usually made from pureed fruit combined with whipped cream.

Serving Tip:To serve this dessert in tall, narrow glasses, put the rhubarb and the raspberry cream in separate pastry bags and pipe into the glasses using a large, round tip.