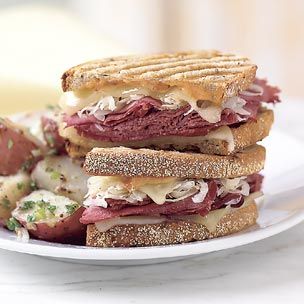 As with much of food lore, there is more than one story about the origin of the Reuben sandwich. According to one version, it was created by Arthur Reuben, owner of the now-closed Reubens delicatessen in New York. He purportedly made it for Annette Seelos, the leading lady in a Charlie Chaplin film that was being shot in 1914, and used ham, rather than corned beef. Other historians claim that an Omaha wholesale grocer named Reuben Kay invented the sandwich during a poker game in 1955. The following year, one of his poker partners entered the recipe in a national sandwich contest and won, and the Reuben entered the spotlight.