"Food, Inc." Likely to Cook Up Some Controversy

"Food, Inc." Likely to Cook Up Some Controversy

The new documentary feature film, Food, Inc., now playing in theaters nationwide, has been widely anticipated by those in the food industry and by foodies in general. It’s likely to be one of the more controversial films of the year. In Food, Inc., filmmaker Robert Kenner probes our nation’s food industry, exploring what he calls â€˜the highly mechanized underbelly that’s been hidden from the American consumer with the consent of our government’s regulatory agencies, USDA and FDA.â€™

The film contends that the U.S. food supply is now controlled by a handful of corporations that often put profit ahead of consumer health, the livelihood of the American farmer, the safety of workers and our own environment.

According to the documentary, we now have the perfect pork chop, insecticide-resistant soybean seeds, even tomatoes that won’t go bad, but we also have new strains of e coli. Kenner portrays the U.S. as a nation beset with widespread obesity, particularly among children, and with an epidemic level of diabetes among adults.

Featuring interviews with such authors as Eric Schlosser (Fast Food Nation), Michael Pollan (The Omnivore’s Dilemma), along with social entrepreneurs like Stonyfield Farms’ Gary Hirschberg and Polyface Farms’ Joe Salatin, Food, Inc. has a clearly defined point of view concerning what we eat, how it’s produced, who we have become as a nation and where we are going from here.

You’ll probably not agree with everything you see onscreen, but we suspect you’ll walk out of the theater wanting to learn more. 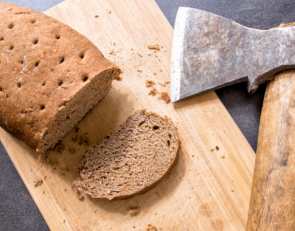