• She would continue to teach on camera, and in seminal cookbooks, for three more decades.

• In this video, she demonstrates how to cook a seminal dish, Beef (Boeuf) Bourguignon; we compare her recipe to what’s on TikTok and Youtube.

Culinary icon Julia Child is famous for many things: her cookbooks, her TV shows, her height (6’2″), and her unusual voice. Her crowning achievement, however, was the skill with which she explained French recipes; it turned on generations of home cooks. Though she is famous for cooking many seminal dishes — like Coq au Vin and French Onion Soup — her signature dish is Beef (Boeuf) Bourguignon.

In this video, she demonstrates how to cook Boeuf Bourguignon on “The French Chef” — which aired on February 11, 1963, on WGBH in Boston — as well as how to brown and braise meat, what it takes to make a great brown sauce, how to braise onions, and how to cut and sauté mushrooms.

We’ve highlighted some key moments with timestamps so you don’t have to watch the whole thing through.

1:12 Child rattles off all of the skills she will demo: how to brown and braise meat, what it takes to make a great brown sauce, how to braise onions, and how to cut and sauté mushrooms.

3:00 Shocking use of paper towels to soak up the moisture of the meat—something you can be sure did not exist in previous recipes of this dish (which dates back to the Middles Ages).

15:11 Here she dries off the mushrooms with cloth towels (so they brown properly) and basically says no one should fret about the soiling of the towels as long as they have “electric washing machines.”

Julia Child was not the first chef to appear on TV, but she was by far the most influential one. She starred in The French Chef, which debuted on February 11, 1963, on WGBH (in Boston) and ran nationally for ten years. It won a Peabody Award and the first Emmy for an educational program.

This now-classic french bistro recipe is essentially a beef stew, slow-cooked and braised in red wine with potatoes, carrots, mushrooms, garlic, onions and a bouquet garni (bundle of thyme, parsley, and bay leaves). Child includes lardons as well; not everyone does.

Other variations include adding a pig’s trotter, using beef cheek, marinating the meat in advance, and caramelizing the onions. You would be wise to pair this with wine from Burgundy (Bourguignon being the provenance of the dish).

One of the earliest written versions of beef bourguignon was penned by legendary chef Auguste Escoffier, who described it in 1903.

On TikTok, there are tk recipes tagged with #boeufbourgignon. Some of the most popular ones have already been viewed more than 1,000,000 times. This video, like many, edits the recipe down to 59 seconds, in an evocative, albeit wordless, visual montage.

Best Beef Bourguignon Recipe for People in a Hurry

Yes, you can learn how to cook this rather time-consuming dish in under a minute. On TikTok, @robbiebell8 talks a quick clip while the video plays at warp speed. Everything runs perfectly well until 49 seconds in when he admits — shocker — he uses Rosemary (“I would normally use Thyme but I didn’t have any.”).

Beef Bourguignon!Slow cooker on summer for 6hrs. Try and get the best beef you can afford. #beef #slowcook #cooking #recipe #tiktokchef

The entire video is just over a minute long and in this one, and the chef doesn’t even speak. Instead, you see the names of the ingredients flash onscreen (sadly, sans measurements). Note: The beef substitute is tempeh.

0:26 He uses beef cheeks.
5:35 He uses parchment paper instead of a proper lid (“to slowly concentrate and get thick and thicker”).
7:23 – Jamie’s idea of hell (peeling those tiny silver-skinned onions)

Binging with Babish tackles Julia Child’s recipe in three minutes and 44 seconds. At the end, he says “Julia Child’s version completely blew my pants off.” 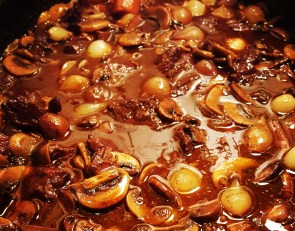