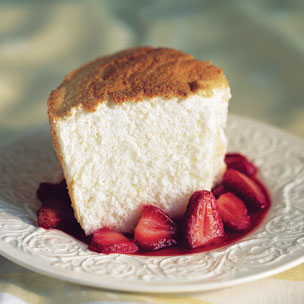 Angel Food Cake Recipe – Eggs are easier to separate when they are cold. Carefully crack the egg and, holding it over a bowl, pass the yolk back and forth between the shell halves and let the whites fall into the bowl. Drop the yolk into a separate bowl, then transfer the whites to a third bowl. Separate each additional egg over an empty bowl, for if any speck of yolk gets into the whites, the whites will not whip up properly. If a yolk breaks, start fresh with another egg. Let the separated egg whites come to room temperature before using them in the batter.