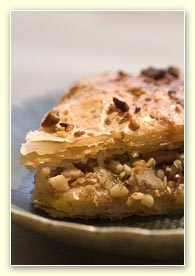 Serves one (if you’re lucky enough to be home alone).

Recipe courtesy of I Love Pecans