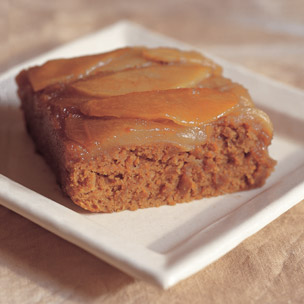 Caramelized Pear Upside Down Ginger bread Recipe.  Sugar is usually caramelized in one of two ways: It is sprinkled in a heavy pan and cooked over low heat until it dissolves, then the heat is increased to medium, or it is dissolved in a little water over medium-high heat, forming a thick syrup. In both cases it is heated until it turns a rich brown. In this recipe, however, the sugar is mixed with butter for flavor. Rather than letting the sugar cook undisturbed to prevent crystallization, the butter-sugar mixture is stirred occasionally until it becomes light brown.