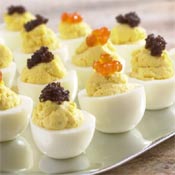 Here’s a new twist on a party standby: deviled eggs topped with caviar. The checkerboard effect is achieved by using black sevruga or pressed caviar, red salmon caviar, and the yellow roe from whitefish.