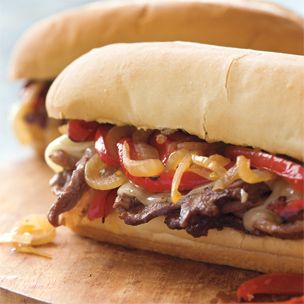 The cheesesteak–thin slices of griddled beef and cheese heaped on a toasted roll–is a Philadelphia treat that has made its way onto menus all across America. Partially freezing the beef makes it easier to slice it thinly without an electric slicer. Have plenty of napkins on hand to catch the inevitable drips.