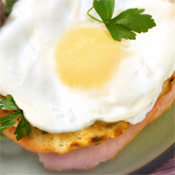 Croque Madame Recipe. A Croque Monsieur is a hot ham and cheese grilled sandwich.  When it’s served with a fried egg on top, it’s called a Croque Madame.

Cooking.com Tip: A traditional croque monsieur sandwich is usually dipped into eggs then cooked in sandwich-grilling iron that has scalloped-shaped indentations. Our sandwich maker allows you to enjoy this decadent sandwich.