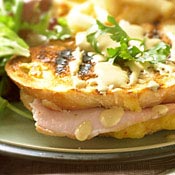 A traditional French croque monsieur sandwich is usually dipped into eggs then grilled on a sandwich-grilling iron.