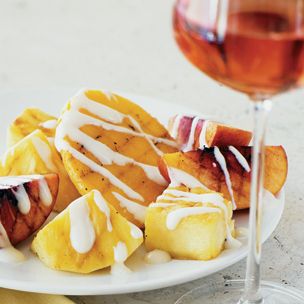 When fruit is grilled, the flesh softens and some of the natural sugars caramelize, creating an added layer of flavor that is reminiscent of the fruit in a deep-dish pie. Here, grilled fruits are combined in a warm salad drizzled with a creamy tart-sweet dressing. Almost any kind of fruit in season can be cubed, sliced, halved and quartered, then grilled.