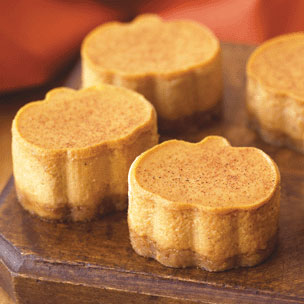 Miniature Pumpkin Cheesecakes with Cinnamon Crust Recipe. These fanciful little desserts are perfect for entertaining and are ideal for an autumn buffet. The graham cracker crust is seasoned with a touch of cinnamon, echoing the warm spices in the pumpkin filling.