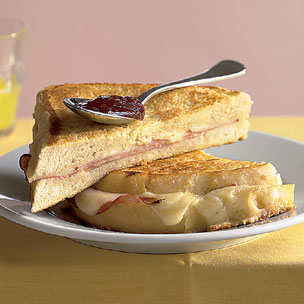 Monte Cristo Sandwich Recipe. The Monte Cristo sandwich is believed to be a variation on the French Croque Monsieur, a grilled ham and Gruyere cheese sandwich that originated in a Paris cafe in 1910. According to many food historians, the Monte Cristo was first served in Southern California in the 1950s.  The sandwich is traditionally accompanied by jam or jelly for dipping.  Here, we pair it with raspberry perserves.