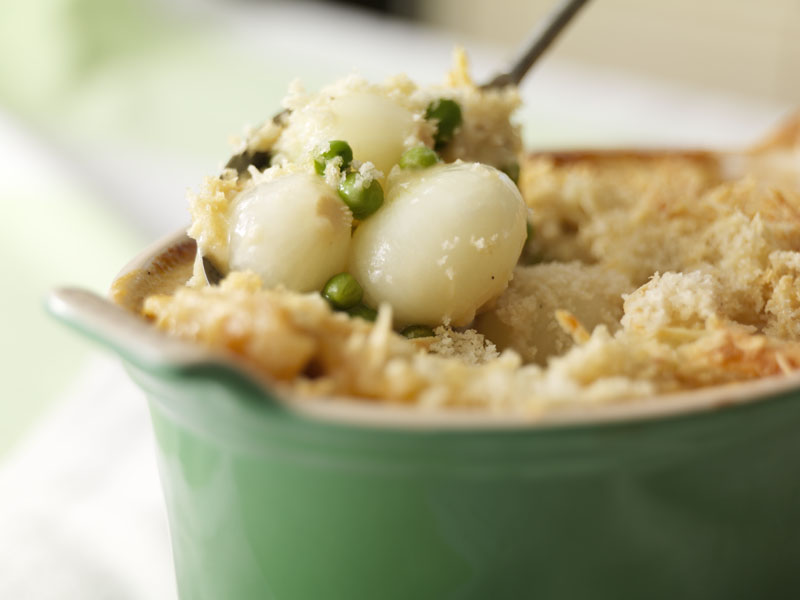 Back in the 1870s, Market Day took place on the first Thursday of every month along the southern stretch of what is now called Olde Western Avenue. This was when farmers within a twenty-five miles radius would eagerly bring their livestock and produce to sell to Blue Island residents. My Great Grandma Ma Schade often shared her memories of Market Day and it was easy to imagine her strolling through the market in search of the best vegetables she could find. And yes, root vegetables like onions were high on her shopping list.

My onion, leek, and pea gratin pays homage to the onion root vegetable and the farmers who worked the rich Midwestern soil in days past. This is the perfect accompaniment to roast chicken, holiday ham, as well as beef or pork roast.

Michael Mech was born and raised in the heart of small-town America in Blue Island, Illinois. A bedroom community of Chicago, the town has a long and rich history to the early 1860s. Perhaps this is why classical methods of preparation and vintage recipes influence his cooking and baking so strongly to this day. Chef Mike has always been a booster to small-town life and bungalow living, but he’s no stranger to the big lights of the city. Mike has been featured in Chicago magazine, the Chicago Tribune, the Chicago Sun-Times, the New York Times, and recently in Who’s Hungry magazine. The Emmy-winning, PBS television show Ask This Old House featured his home to restore the kitchen to its historical roots, and Mike demonstrated his culinary skills on the show. A natural with the food landscape of Chicago, Mike served as the guide to the wide variety of cuisine of the Windy City to world famous chef David Rosengarten, as documented recently in Forbes magazine. Mike keeps a blog and website as The Bungalow Chef, where he shares “food stories,” vintage recipes, and the “art of real, American cuisine.”