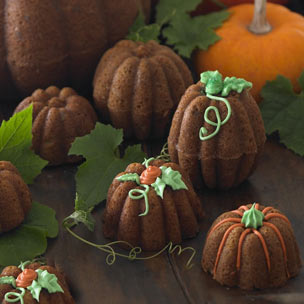 Pumpkin Patch Cakes Recipe. These petite pumpkin-shaped cakes can be served on their own or joined together with frosting to form three-dimensional pumpkins. Dust the cakes with confectioners’ sugar, finish them with colorful frostings, or pipe on smiling or scary jack-o-lantern faces.