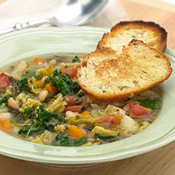 Ribollita is proof that some soups are better the next day, for it means “reboiled”. Use your own beans for this soup because they taste so much better than canned, plus they produce a flavorful broth. Since this soup is Tuscan, why not serve it with a Tuscan red wine, such as Chianti, Montepulciano or Morellino di Scansano. It will be quite thick, more of a potage than a soup.

Cooking.com Tip: The cannellini beans add texture and mild flavor to this vegetable-laden soup. Don’t use canned beans because the dried beans help produce a flavorful broth and won’t become mushy while cooking.