Rigatoni with Salami, Mozzarella and Arugula

Rigatoni with Salami, Mozzarella and Arugula 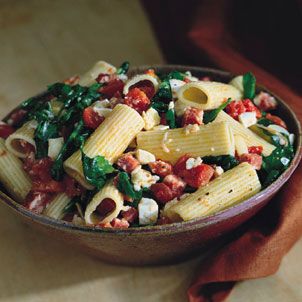 For a pasta sauce, try the southern-style cacciatorini, soppressata or Genoa-style salami. Many varieties come in a mild or spicy version. Salami is best in a pasta sauce when cooked only briefly, so add it in the final minutes.