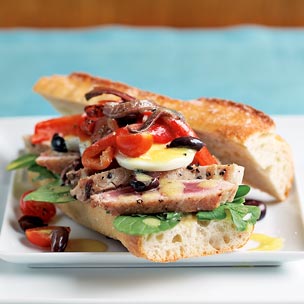 This sandwich, essentially a “salade nicoise” on a roll, is a specialty of Nice, France. Fillings vary somewhat, as might be expected, but tuna is nearly always included, as are tomatoes and olives. It is sold from storefront sandwich shops, at some “traiteurs”, and even at modest cafes located near the center of town—far from the elegant cafes along the Promenade des Anglais bordering the Mediterranean.