A man preferring to be known only as â€˜Traction Manâ€™ has been blogging about his lengthy stay as a patient in a British Hospital. Articulate and full of biting humor, his Notes from a hospital bed blog has generated quite a following.

It’s the interactive segment of the blog, â€˜Hospital Food Bingo,â€™ that has captured the most attention. It’s a board game (or “Bored Game”) featuring photos of his hospital meals, which his blog followers try to identify. WHAT IS IT? This meal puzzle will not be solved. Traction Man rejected it.

The gentleman, stuck in traction for 22 weeks with a bone infection, has nothing but praise for the hospital staff, but the food…

“There’s almost a general theme of wallpaper paste made with milkâ€”that’s what most of the food seems to taste like,â€™ he told The Sun. He recently posted a picture of a meal, which was vegetable moussaka. That one, he says, was a real stumper.

“The entree tends to be uniform beige,” he says. Most of the vegetables need to go in a spin dryer before you get to eat themâ€”they are that wet.â€™ Traction Man says the food is prepared by a private company, possibly â€˜prisoners in Wales.â€™

On a Customer Food Satisfactory Survey, he described the preparation of his dinners as â€˜haphazard and chaoticâ€™ and said he had special dietary needs â€˜only after eating your food.â€™ On September 1, his post offered this comment: â€˜the macaroni cheese could have doubled as wallpaper paste.â€™

Poor fellow. Well, someday he’ll be out and about and able to enjoy the British cuisine the world has come to know and love. 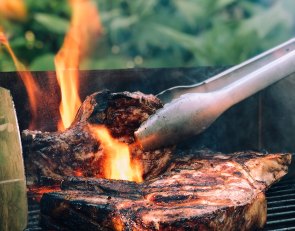