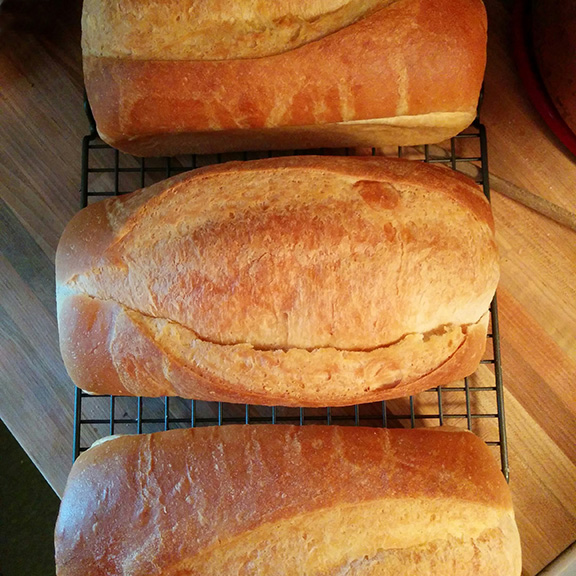 The blizzard of 1967 hit Chicago and the surrounding area on January 26th with a record setting 23 inches of snow followed by high winds and drifting. To this day it remains the worst winter storm in Chicago history. My small Mayberry-esque suburb of Blue Island, Illinois was in its path, and for a boy of eight years old, it became a magical dream world. School was called off, snow forts were built, and there was endless television on all THREE channels. However, for my parents, there was serious concern for the safety of family and friends. Just returning from work was a challenge for Dad and with little warning of the storm, mom found grocery store shelves quickly emptied of bread, milk, and daily staples.

This was when mom taught me about bread being the staff of life. Interestingly enough, she always kept yeast in the house and we had plenty of flour and sugar left from the holiday baking season. Mom pulled me into her emergency mode and shared with me the art of bread baking. She dug out the vintage crock-like Bauer Bowl (which I cherish and still use today) and my Great-Grandmother Rose Schade’s bread recipe. I quickly learned from a master the techniques of working with yeast, kneading dough, letting it rise and punching it down to rise once again. Loaf after loaf of glorious bread went into the oven and was shared with family, friends and neighbors. All of that bread with its warm and comforting aroma, as well as that iconic ’67 snow storm, will remain with me forever.

Michael Mech was born and raised in the heart of small-town America in Blue Island, Illinois. A bedroom community of Chicago, the town has a long and rich history to the early 1860s. Perhaps this is why classical methods of preparation and vintage recipes influence his cooking and baking so strongly to this day. Chef Mike has always been a booster to small-town life and bungalow living, but he’s no stranger to the big lights of the city. Mike has been featured in Chicago magazine, the Chicago Tribune, the Chicago Sun-Times, the New York Times, and recently in Who’s Hungry magazine. The Emmy-winning, PBS television show Ask This Old House featured his home to restore the kitchen to its historical roots, and Mike demonstrated his culinary skills on the show. A natural with the food landscape of Chicago, Mike served as the guide to the wide variety of cuisine of the Windy City to world famous chef David Rosengarten, as documented recently in Forbes magazine. Mike keeps a blog and website as The Bungalow Chef, where he shares “food stories,” vintage recipes, and the “art of real, American cuisine.”