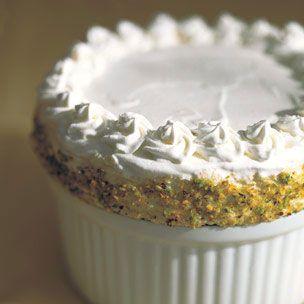 This unbaked soufflé achieves its lofty height with the aid of a paper collar. To make a collar, cut a strip of parchment or waxed paper about 2 inches longer than the circumference of the soufflé dish. Fold the strip in half lengthwise and seal the open edge by folding it over, forming a 1-inch flap. Tape or tie the paper around the soufflé dish so that it rises 2 inches above the rim. The collar lets you fill the dish above the rim, allowing this frozen dessert to mimic the puff of a traditional oven-risen soufflé.

This dish includes uncooked eggs. They run a risk of being infected with salmonella or other bacteria, which can lead to food poisoning. This risk is of most concern to small children, older people, pregnant women and anyone with a compromised immune system. If you have health and safety concerns, do not consume undercooked eggs.