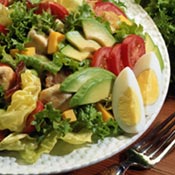 This recipe takes advantage of many convenience products such as pre-washed lettuce, salad dressings and roast chicken found in the deli section of supermarkets.