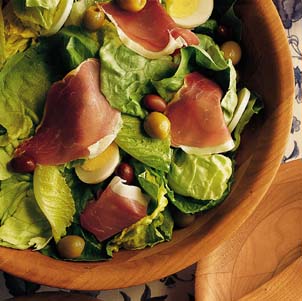 As early as 500 A.D., lettuces, asparagus, leeks, garlic, and wild herbs and greens were used in salads around the Mediterranean. Vinegars were made from grapes, figs, or peaches and salt. During the years when the Moors planted the first market gardens and orchards in Spain, spring onions and citrus juices were added to the mix. With the discovery of the New World, tomatoes and peppers became salad standbys.