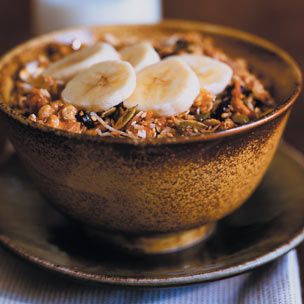 Any of the following ingredients may be added to the granola in balanced quantities to taste: chopped dried dates, apples, pineapples, apricots, pears or mangoes; dark raisins or golden raisins; dried cranberries, cherries or blueberries; chopped almonds, hazelnuts, raw peanuts or sunflower seeds; and/or wheat flakes or oat bran. Also try different honeys, such as lavender or orange blossom, or substitute maple syrup for the honey. When trying new additions, be sure to maintain an appealing proportion of crunchy ingredients in the final mixture. 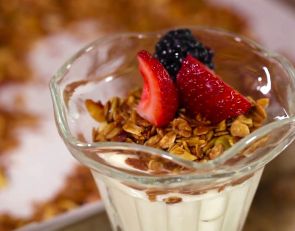