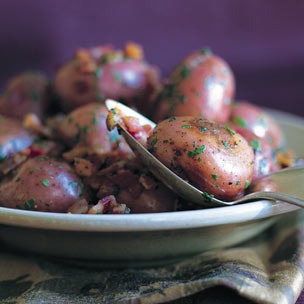 Potatoes accommodate many flavors, none more readily than that of bacon. When bacon is the smoky seasoning as well as a major ingredient, only the best will do. Apple wood-smoked bacon is sweetly flavorful; choose a thick-sliced one that will not shrivel.