Shrimp is one of our favorite foods at The Food Channel, and we’re not alone. According to Seafood News, in 2017, in America alone, it was a record year at nearly 4.4 pounds consumed per person.

To celebrate this favored crustacean, we offer some fun facts, from the seafood experts at The Oyster House (which opened its first restaurant in Gulf Shores, Alabama in 1983), as well as some of our favorite shrimp recipes.

Now that you have the 411, give some of our favorite shrimp iterations a try!

The tropical flavors of mango and ginger paired with the Latin heat of jalapeños and tequila turn shrimp into a sweet and glossy appetizer or main dish. Recipe here.

Aguachile is a Mexican dish that’s made with shrimp, smothered in fresh lime juice, white vinegar, and spiced garlic sauce. Translated to “shrimp in chile water,” you can think of this dish as a spicy ceviche! Courtesy of Chef Saul Montiel of Cantina Rooftop in New York City. Recipe here.

Many shrimp scampi recipes are overloaded with butter; this recipe is balanced with a blend of butter and monounsaturated olive oil and tossed with fresh baby spinach. It’s rich in B vitamins, omega-3 fatty acids, beta-carotene, calcium and important phytochemicals. Recipe here.

Inspired by the Academy-Award nominated film Victoria and Abdul, this Chilled Mango Caramelized Onion Soup is the perfect meal for when you’re watching at home or after seeing on the big screen. Recipe here. 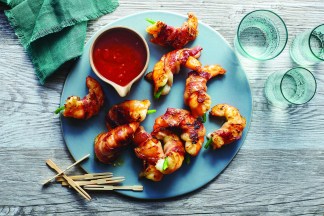 The sauce is sweet with a hint of Cherry Coke, and once it connects with the jalapeño, it sits on the tongue with an exciting contrast of hot and sweet and savory. It goes well with a cold cocktail or even a light beer. Excerpted from Valerie’s Home Cooking by Valerie Bertinelli. Recipe here.

From Guest Contributor Roni Proter, this video walks you through her recipe for Coconut Shrimp with Pineapple Salsa. Crispy coconut shrimp, flash fried until it’s brown and caramelized on the outside, tender and fresh inside. Completely delish! Show here (with recipe link).

And to make you feel as if you’re eating in Gulf Shores, check out this review of Gulf Shores Steamer Restaurant, by Assistant Editor Kaitlan Foland, with some fun seafood facts and great photos.