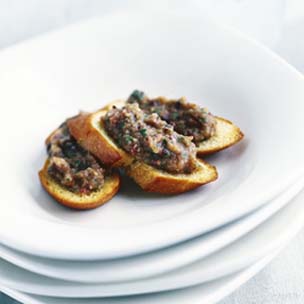 Eggplant caviar is a wonderful spread to make when eggplant is plentiful in summer. The bruschetta can be served already assembled for a casual occasion. For a more formal gathering, present each diner with an individual ramekin of caviar and a plate of toasted baguette slices to make their own.