Flatbread with Eggplant, Peppers and Olives

Flatbread with Eggplant, Peppers and Olives 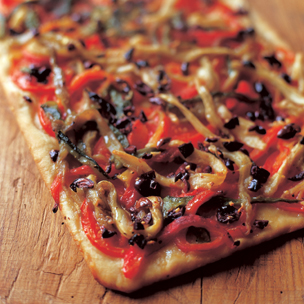 Barcelona’s pastisseries don’t serve only sweet things. Whatever the day or time of year, there will always be a few savory snacks to take away—usually a tasty flatbread, or coca, baked on the premises, with a topping of eggplant and bell peppers, onions and raisins, spinach and pine nuts, cured anchovies, or wild mushrooms and herbs. The coca is typically described as a Catalan version of pizza, with its base of thin, baked crust, though the topping rarely includes cheese and only occasionally features tomato. Sweet coques are also made for holidays and other celebrations. This recipe is a version of coca most often seen in Barcelona’s pastry shops.

Serve with a smooth, fruity Rioja.