Oysters on the Half Shell with Apple Horseradish Slaw

Oysters on the Half Shell with Apple Horseradish Slaw 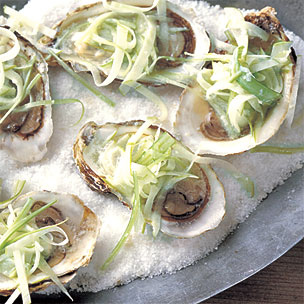 Plump, briny, Atlantic oysters are cleverly offset by tangy green apple and pungent horseradish in the crunchy slaw that tops them here. A small amount of crème fraîche mellows the assertiveness of the topping, and its richness matches that of the oysters.