Some of our favorite stories to research and write involve the intersection of pop culture, and food and drink. Last year, we featured many recipes and cocktails inspired by award-program nominees. And, that was my intention for this story, with the Golden Globe Awards coming this Sunday. I soon realized; however, that there are many serious and heady topics in both mediums, across most categories this year.

And then it stood out like magic. Take one nominee in a category and pair the leads with cocktails based on their preferences in life or the characters they portrayed.

In what shouldn’t come as a surprise, I chose the motion picture made for television category and the nominee, Feud. If you haven’t seen this delicious ode to the rivalry between Bette Davis and Joan Crawford, you’re missing out. I became obsessed with it after watching the pilot.

Davis and Crawford are the main event, no doubt; however, there are a core group of female leads who take you back to Hollywood’s Golden Era, which for some, wasn’t so golden. Here are my picks for the stellar female characters of Feud.

She referred to her home as “the house that guilt built,” and this gossip columnist knew how to wield that power to her benefit. For her I choose The Seven Deadly Sins – for creating malice in Hollywood. Tasty sangria, made with brandy, red wine, Sparkling Ice Orange Mango juice, a fresh cinnamon stick and fresh fruit. Delightfully wicked recipe here.

Pauline – The Number One (Old Fashioned)

She was known as the director’s right-hand lady, his number one. For the ceiling-pushing Pauline, I choose the number one cocktail – the Old Fashioned. This version’s made with wood-aged dry gin that won silver at last year’s Los Angeles International Spirits Competition. The drink combines Acre Distilling Co. Meander Wood Aged Gin with simple syrup, Angostura bitters, and orange bitters, garnished with an orange peel. Bitter enough for you? Recipe here.

What? Nothing Latin? That’s because in real life, Joan Crawford may have called her Mamacita, but her right-hand lady was a German immigrant. I could have gone the German beer route, but it seemed too obvious. She was salty, spoke her mind, and had the energy of someone who’d downed perhaps six of these. Recipe here.

Ms. Crawford was notorious for carrying a flask of her favorite vice, but I’d offer her The Tish Special, because it’s made with liberal amounts of Tito’s Homemade Vodka. And the whole point behind Tito’s, is that it’s ultra-purified and refined to remove more of the impurities; which, reportedly helps reduce the after effects of one too many. Something Crawford desperately needed. She would have loved Tito. Recipe here.

As time wore on with “the feud,” Ms. Davis grew somewhat bitter, definitely salty, but also bitter—and rightly so. These women had to fight to the bitter end and it definitely took a toll. But how delicious to watch their tenacity! This cocktail, which prominently features bitters, is from iconic Beijing restaurant MR CHOW. It’s concocted by blending aged Bourbon, Luxardo Apricot, fresh lemon juice, Fee Bros Old Fashion bitters and garnished with a dehydrated orange wheel and black cherry. Recipe here.

And while you’re watching, cook up a batch of this delicious Spiced Holiday Carmel Corn from Guest Chef Jim Bailey. 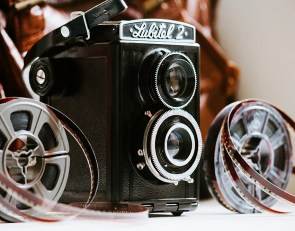 And The Envelope Please: An Oscar® Toast 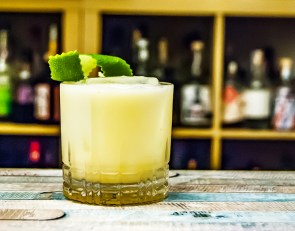